Until now, I was pretty convinced that “After Earth” was going to be another “I Am Legend” debacle for the otherwise-brilliant Will Smith. The trailer I saw today makes me think it might be worth watching.

I saw no sign of the U.S. military in the new “Wolverine” trailer, so hopefully they’re avoiding that whole can of worms (I almost walked out of the last one). Another maybe.

“Hunger Games” looks as moronic as ever. No thanks.

“The Lone Ranger” looks not-quite-as-awful-as-I-thought. Not “Starsky and Hutch” movie bad. Still nothing I have any interest in seeing. Too bad they won’t make a REAL Lone Ranger movie.

I really liked it. I had a couple of quibbles with statements made (e.g., they talked science in the movie for literally about five seconds, and still screwed it up), but it’s still very low on my Hollywood quibblemeter. I went in prepared to HATE Kingsley as “The Mandarin” (I don’t know anything about this particular Marvel character), but the direction they took it actually surprised me. Well done.

My new hometown gets a quick shout-out. 🙂

The action sequences were excellent (Downey brings in a little of his Wing Chun), as was the dialogue.

The ending of the movie does worry me a bit, though–there’s a montage of images from all three movies, and the Marvel “credits surprise” revealed nothing about future movies. All-in-all, it felt like it was done to wrap up the Iron Man character, which would be unfortunate. 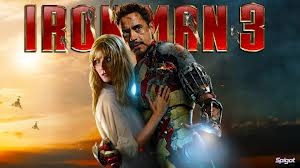